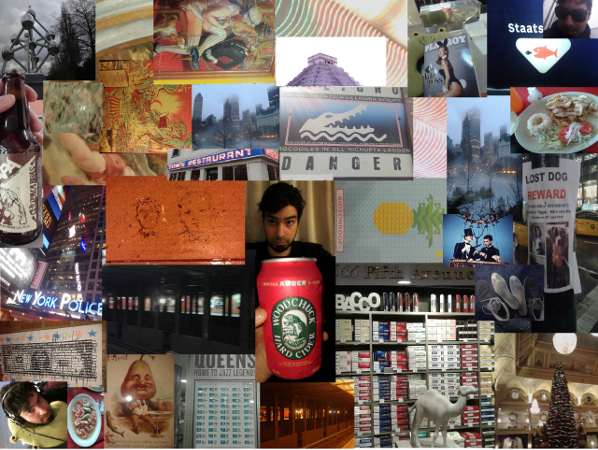 This is a collection of songs that I love from around the world! It’s a transcontinental trip from Japan to Russia, Germany, France, UK, USA and Mexico, etc. I wanted to put a pinch of everything, which is of course an impossible task, so I finally settled for an all-around pick of personal favorites.

It’s also a kind of « définition ostensive » in the way that the working context of this mix actually started in Paris in late 2013 and was continued over in Belgium and Holland, the second part finished while travelling through NYC and Cancun to finally arrive to Monterrey (northern Mexico), where I was going to go play at the time, January 2014.

And so on the way I profited to record some ambiance sounds of that trip, from the glitches in NYC (delays and re-scheduling in the subway and JFK airport, all the while drinking Millers all those waiting hours) to the birds and echoes in Chichen-Itzá.

I’d say it starts like a nice wake-up call, progressing non-linearly to a harder center, and ending kinda beach-like, the ambiance around here definitely contributing to that. So it’s built much like a bump, going up and down a rollercoaster trough some rocky and fun stuff and finally dropping you off cozily on soft white sands... Or something like that, personal interpretations accepted. Bon appétit!